background of the comic

In German, my mother tongue we use the same word for pigeon and dove. I learned about the white dove as a symbol for peace and always related it to the birds in the street, thinking of it as “peace pigeon”. This minicomic is about fighting people and pigeons within our cities. Below the visual Comic find a text-based version Screenreadable Comic Version. 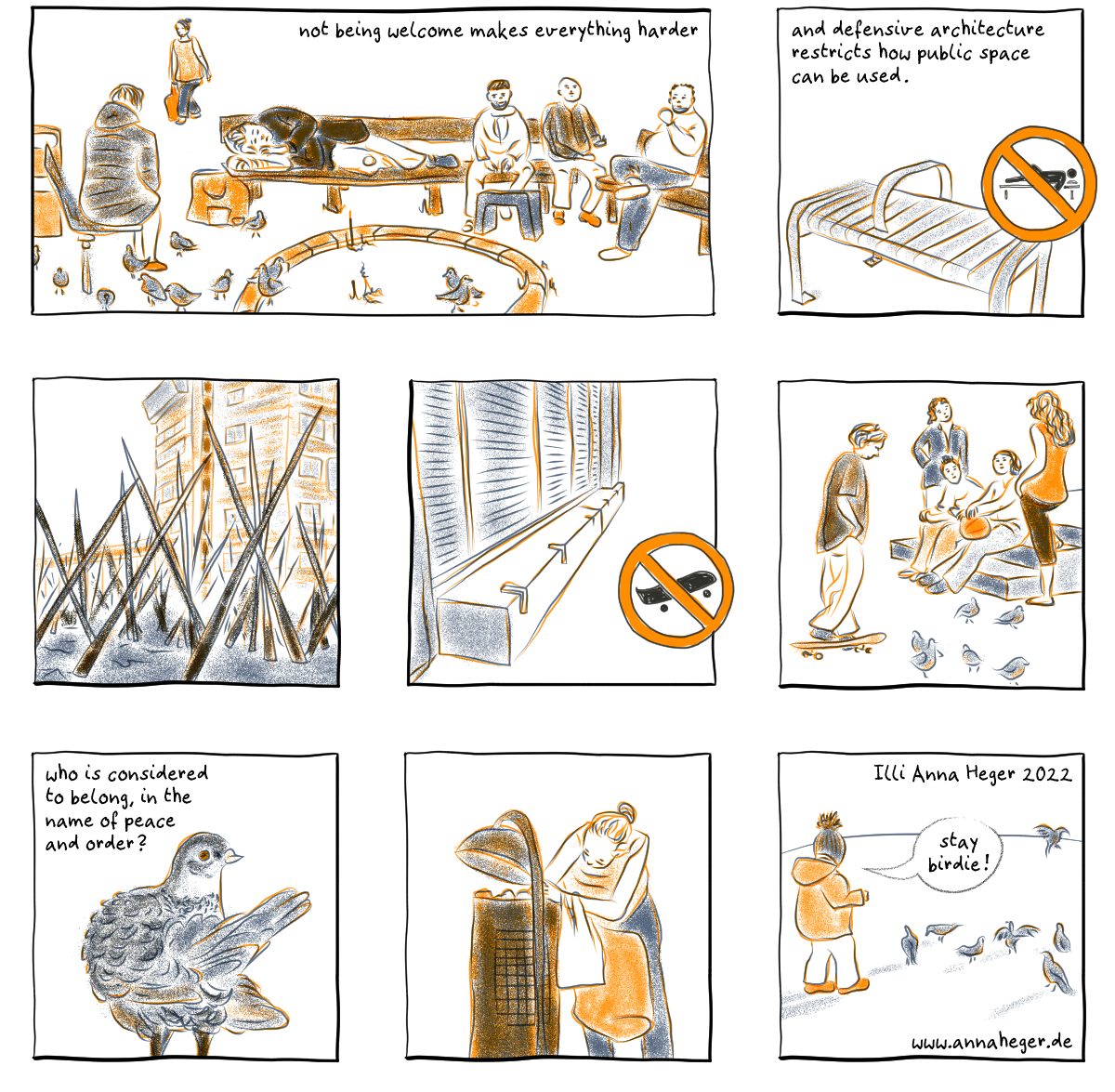 The one page comic consists of 11 panels, digitally drawn in orange and indigo on white. All text is hand-written font, including the title on the first panel.

1) A pigeon with wide spread wings is hovering over spiky anti-pigeon fence on a wall.

2) The pigeon flies to two boxes distributing papers, one of the papers attached to the box reads »War on terror« in the Daily News. The other box belongs to the Münchner Merkur, the cover with print too small to read. Text in the right upper corner: »what is peace for some«

3) Text continues in the left upper corner: »can be exclusion for others.« The pigeon is kept from landing on a old fashioned street light attached to a house, by the by large spikes on top of its wrought-iron mounting.

4) Several people sit on public benches around an empty circular flower bed. A person in a down jacket sits alone on a bench next to a trashcan,surrounded by a flock of pigeons. On the left of a long bench somebody with a dark jacket is sleeping with the head on their belongings. On the other side three people talk to each other. In the distance another person passes carrying a bright orange shopping bag. Text above: »not being welcome makes everything harder«.

5) Text continues in the left upper corner: »and defensive architecture restricts how public space can be used!«
Below a bench that as an armrest right across the middle. An orange warning sign with an crossed out icon of a person lying down is overlayed.

6) Behind the close-up of anti-pigeon spikes an apartment with many windows is depicted.

7) The facade of an office building, to the benches in front, anti-skateboard elements are fastened. An orange warning sign with a crossed out skateboard is overlayed.

8) A group of teenagers sitting and standing outside on stairs chatting. A persons with long curly hair sits and holds a basketball. At the bottom of the stairs another teenager with baggy pants moves their skateboard back and forth. They are surrounded by a flock of pigeons.

9) Close up of a pigeon that ruffles up their feathers and turns to look at us. Text above: »who is considered to belong, in the name of peace and order?«.

10) The person from earlier with the orange shopping bag is rummaging through trash in a trash can and puts things into a white plastic bag.

11) A small child is feeding pigeons and calls out to one of them for flying off: »Stay birdie!«