I love to use my comics to share my understanding of theories. The analogy of a house for explaining deconstruction is based on an article in the booklet “Wer andern einen Brunnen gräbt” by Mostafa Akhtar. In 2013 the German version of this comic and its text-only transcript were published as a guest article on the Mädchenmannschaft blog. Below the visual Comic find a text-based version, a screenreadable comic version. 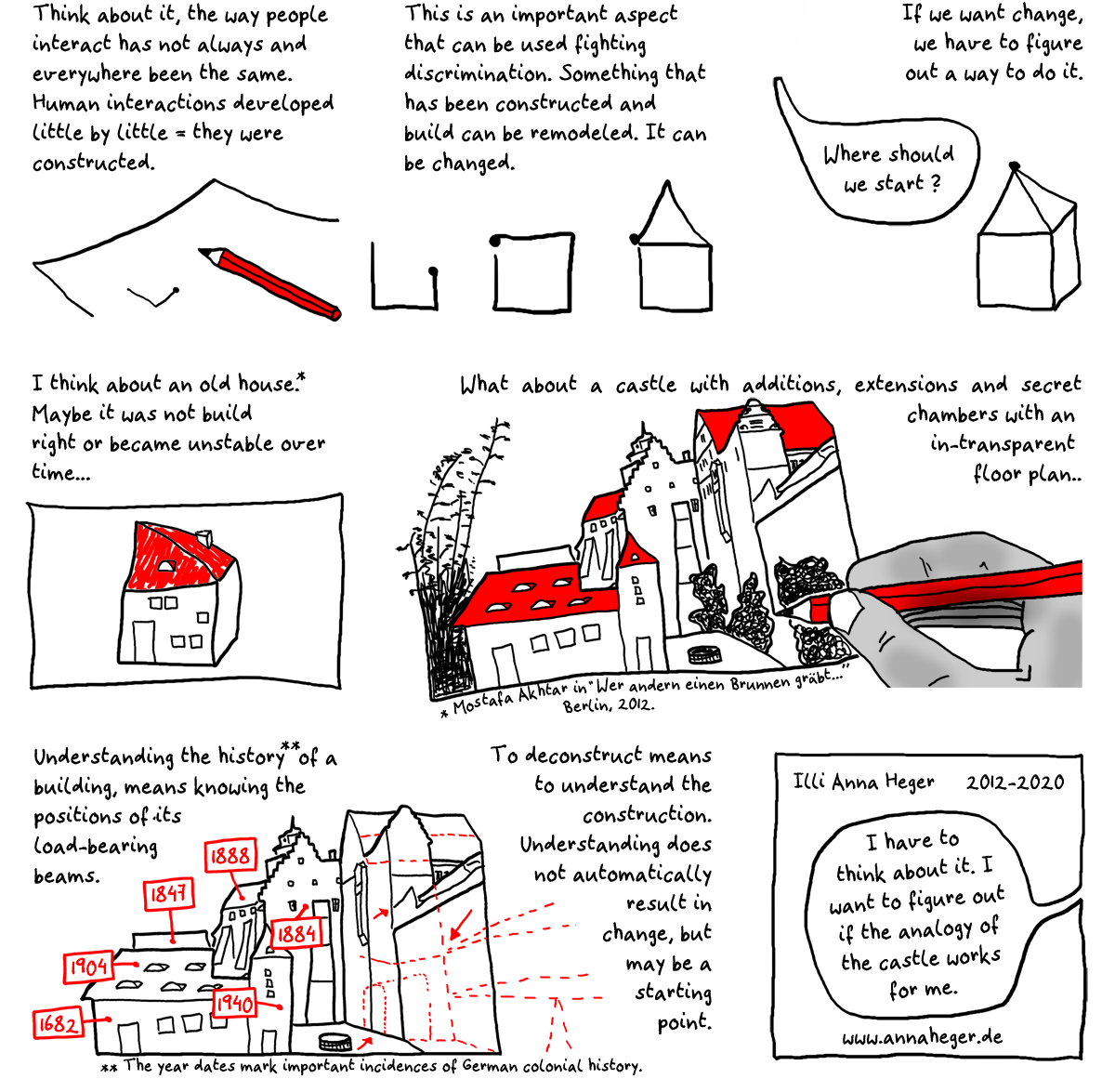 Story of the castle

A tiny little house sketched with just a few black lines. Its triangular roof is painted red. In the back a large bush.

Two white people sit at a small table with an empty espresso cup, paper and a pen. Walburga sits with their legs crossed making a grand gesture: “Discriminatory social structures are constructed as …”

Oscar sits with their hands clasped and interrupts: “You know, I do not get that part,really !

Walburga starts sketching on a piece of paper. Two lines are connected and perpendicular to each other. They put the pen to the side and say: “Think about it, the way people interact has not always and everywhere been the same. Human interactions developed little by little = they were constructed.”

Line by line the sketch looks like a square with a triangular roof. This is the image of a simple two-dimensional house. Walburga continues: “This is an important aspect that can be used fighting discrimination. Something that has been constructed and build can be remodeled. It can be changed.”

Walburga adds more lines to the sketch. It is still simple but three dimensional: “If we want change, we have to figure out a way to do it.”

Oscar replies with: “Where should we start ?”

Walburga continues sketching the little house adding windows, a chimney and a door: “I think about an old house. Maybe it was not build right or became unstable over time. What about a castle with additions, extensions and secret chambers with an in-transparent floor plan.”

The sketch has become very elaborate now. Around the house, or rather around the castle a castle complex with many different building and a well in the castle yard. Walburga says: “Understanding the history of a building, means knowing the positions of its load-bearing beams.”

The next sketch of the castle has red lines that indicate beam, chambers and connecting passages in the buildings. Additionally, red year dates mark important incidences of German colonial history: 1682, 1847, 1884, 1888, 1904, 1940.

Walburga closes their explanation: “To deconstruct means to understand the construction. Understanding does
not automatically result in change, but may be a starting point.”

Oscar muses: “I have to think about it. I want to figure out if the analogy of the castle works for me.”